I repair A1342 MacBooks, and so I know them quite well.  They can be wonderful machines, even in 2018.  Here is my advice for the diagnosis and repair of the A1342 series of machines.

The A1342 is the only polycarbonate Unibody MacBook.  There are two revisions: late 2009, and mid-2010.  These revisions have interchangeable parts.   The only significant difference is the CPU clock speed.  The machine's general design (and performance) is very similar to the 2010 MacBook Pro. A1342 manufacturing was discontinued in early 2012.

This is almost always due to liquid ingress through the keyboard.  Often times water will kill the keyboard, but everything else will be just fine.  The best way to check it out is to remove the back cover and try to start the machine by briefly shorting the jumper pads with a pair of steel tweezers.  When shorted for about 1 second, the fan should spin up and the machine should boot as normal.

The startup jumper pads vary by logic board version, but there are two small square solder pads near the keyboard connector.

Do not stack two A1342 MacBooks on top of one another when in use - you'll cause them to go to sleep.  The sleep magnet on the lid will trigger the sensor on the other laptop.  The sleep sensor is located next to the headphone port.

Assuming it isn't software, crashing or poor reliability problems is very likely due to bad memory.

Note that these MacBooks only like PC3-1066 (aka 8500) memory.  If you have faster memory installed, you'll very likely have severe reliability problems.

Alternatively, you can use a "full test" through Apple Diagnostics (option-D at boot for 2010 models, or with boot media for 2009 models).  This is OK, but not as effective as Memtest86.

These rarely fail, but they can.  When they do fail, I think it is due to a knockoff charger sending lousy voltages to the Mac, resulting in a burning out the board, its contacts, and/or melting the top case.

Here are my standard steps for performance:

If you have any tips, suggestions, corrections, or clarifications, please comment and I'll add them here.
at February 23, 2018 No comments:

Sadly, it was becoming unreliable.  It would be fully charged, and I'd hit the switch and maybe it would begin to start and then stop, or it would lurch and stop - or maybe it would do nothing.
At first I thought it was the battery, but then I found that by carefully wiggling the switch I was sometimes able to get the vacuum to work.  All that on-off action over the months made the switch unreliable.

Instead of throwing away the otherwise perfectly good vacuum, I decided to replace the worn switch.

The one part needed: A $5 Switch

I am happy to report that the specific switches used in the Dustbuster are commodity items that are manufactured by many firms and can be purchased on-line for under $5.


There seems to be two types of switches used, based on the charging mechanism:
Here is a link to the switch that I considered to be a good match for both applications.  Just with the Lithium model, I wouldn't attach a wire to the NC terminal of the switch.   For the NiCad model, all three conductors would be used.

The tools I needed to replace the switch were extremely basic.
Don't have these things?  Buy them.  They are essential repair tools, and should last for decades (mine are at least 40 years old).

WARNING: Before beginning, note that operating the vacuum with the housing off will, in the best case, make a huge and disgusting dust cloud.  Also, it is possible to hurt yourself.

This is what I did to repair my Dustbuster in about 30 minutes:

It took me about 30 minutes to perform this repair.  The dustbuster now works great, and there was no need for an expensive battery pack or other parts.  Furthermore, there was no "hacking": The replacement switch is a perfect match, and the machine looks and operates the same as it did when new.

My advice to Black + Decker engineering: Rethink the switch!  These switches should be good for 100,000+ cycles, but mine very likely didn't exceed 2000 cycles.  Either your design is putting too much stress on the switch, or the switch that you're buying doesn't meet the duty of the application.  Happily, the switch failure appears to be "fail-safe" - my switch failed in the open (off) position.  That's likely a lot better than the switch failing in the closed (running) position.
at February 22, 2018 No comments:

Here's my procedure on how to remove and replace the logic board of an HP Pavilion DV6.

These machines often fail to start due to a motherboard failure.  With a motherboard failure, upon pressing power the fan will first spin and the power light comes on.  The capslock key will flash white once every 4 seconds, and the f12 key will stay a solid orange, and the screen - although powered up - displays black only.

Although the caps lock "single blink" indicator at boot implies a CPU failure, in my experience it is not due to the CPU itself but the supporting components on the motherboard. The only solid solution is to repair or replace the motherboard.  Replacement boards are readily available.  I bought one and replaced it myself.

NOTE: The screws are different sizes, and its important to reinstall them correctly.  I color-coded the different screws in the photos below and refer to them in the text. 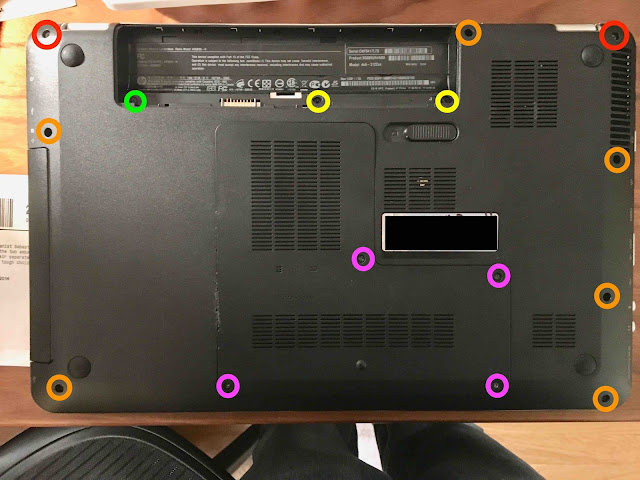 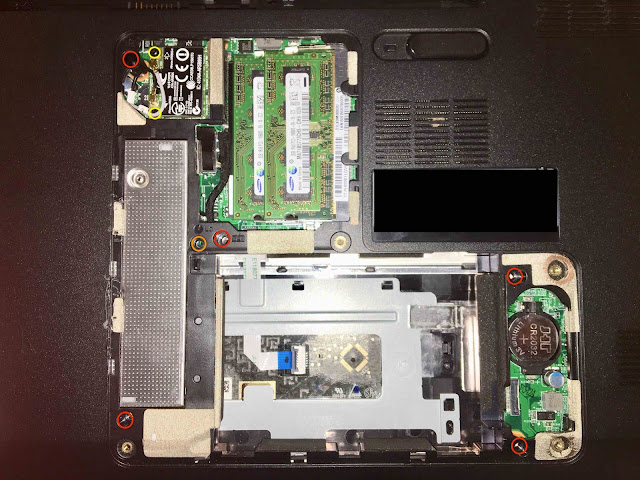