A great friend of mine had a 12-inch iBook laptop from 2005 - with a broken keyboard.  She asked me to help her shop for a new Mac to replace her old tried-but-true laptop.

Whenever anyone asks me for computer advice, I ask them what they want to do with a new computer.

She told me that she used her computer for basic email and surfing the web - she said the old iBook was great for many years, but that now, with a broken (and dirty and gross) keyboard, it was time to move on.

After thinking about it for 15 minutes with her, we concluded that the best approach was to fix her old laptop.  A little upgrade is a LOT easier than going out and buying a new machine, and then migrating 6 years of data and apps.  Also, the price is a lot less than a new machine. 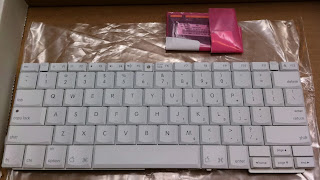 The components arrived in a few days.  Here was the basic procedure:


In all, it took less than 10 minutes to upgrade the iBook.

My friend ended up with an incrementally faster computer at a very low cost and with very low stress.  She did not end up with a new, fast-as-lightning computer or a hole in her pocket.

I loved this upgrade because the cost, effort, and result couldn't be beat:
And I had:

In short, these old iBooks are still useful little computers.  And with a little effort, you can keep them ticking for several more years to come. 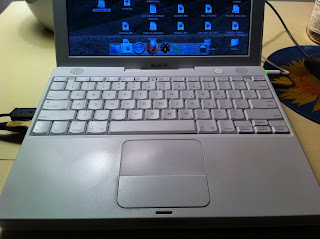 The Repaired and Upgraded iBook: Looking great, running great!
at February 06, 2012 No comments:

Connecting your MIDI keyboard to your Mac 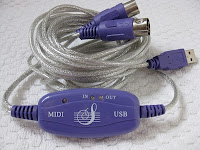 MIDI and the Mac.  It's easy, fun, and shockingly inexpensive!

I enjoy fooling around with musical instruments, and so when Garageband originally came out several years ago, I was very excited to start using it with my cheap little Casio keyboard.

Initially it seemed expensive and complicated to get the right parts together to connect the Mac to my keyboard via MIDI. I didn't want to spend a ton of money in professional-class electronics. I wanted to fool around.

Happily, I discovered that it's inexpensive and easy.  If you know where to look, a Mac-compliant MIDI adapter can be purchased for under $10! That's right, for less than $10 I connected my Mac to my MIDI keyboard and by MIDI drum kit.

I bought an MIDI-to-USB interface, in particular, one like this really inexpensive USB MIDI Cable available through Amazon. The adapter is a simple device that has a MIDI "in"/"out" connectors on one end, and a USB connector on the other.  The adapter doesn't require a power adapter - it's just a magic converter that translates MIDI into USB.

The beauty of this interface is that it required no special drivers for my Mac at all. My Mac, running Mavericks (and Lion before that) automatically detected it. Awesome.

I connected the MIDI-in connector on the cable to the MIDI-out port on my keyboard. And then I plugged the USB plug into my Mac. Hookup was that simple. 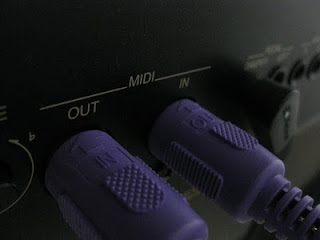 MIDI "out" cable goes to MIDI "in" port, and vice-versa

From there, I fired up the Garage Band application and turned on the keyboard. In Garageband, I created a new "Piano Project". 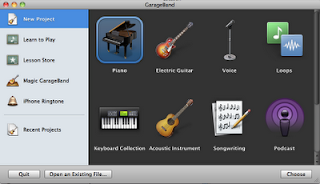 I started by creating a new "Piano" project

Once the new project appeared within Garageband, notes on my keyboard were coming out of my Mac's speakers. If this doesn't work, you may want to double check your volume and make sure that the "in" and "out" MIDI cables are plugged into the "out" and "in" on your keyboard.

From there, I was able to double-click on the Piano icon within the "tracks" view in order to change the instrument of my key presses to something else, like a sax. Do so reveals the Software Instrument selector.

Double-clicking on the piano icon sets you change the instrument 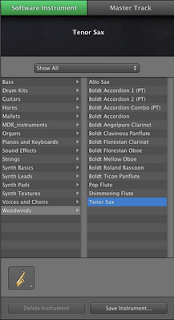 Since we play musical instruments in the house quite often, I decided to connect the Mac to an amplifier. I used a basic 3.5mm jack plugged into the headphone port of the Mac. I connected this to a small guitar amp. 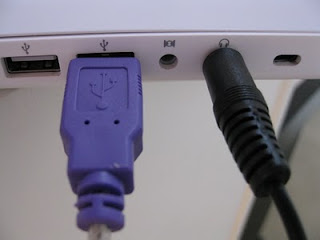 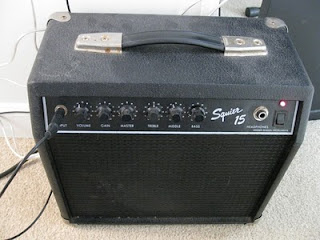 Connecting a small guitar amp to the Mac

It's a good idea to turn down the volume on the amp before plugging or unplugging your Mac from it.

My next step is to experiment more deeply with GarageBand and some of the add-on instrument packs. Some add-on packs for GarageBand include:
That's my initial attempt to get started with MIDI on the Mac. It works great, but there is a lot more to try! Have fun!