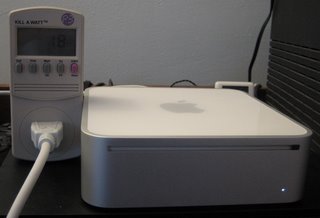 With electricity quickly approaching $2 per watt per year, leaving a computer powered is a very expensive proposition. I found that I could power down my PC and save over $100 per year.

Here's how to accurately estimate how much your computers cost to operate.

In order to calculate the cost, I first calculated my total cost per watt per year. With my recent electric bill in hand, I used the following formula:

With this watt-year value, it's easy to accurately estimate how much your computer (or clock radio or refrigerator) costs per year.

Computer Cost per Year of Operation

Impact on Air Conditioning
The above chart represents only the power that the PCs consume. But in the warmer months, the heat generated by a computer (or any other in-home electrical device) generates heat that needs to be removed by an air conditioner. This is simple thermodynamics.

An optimistic rule of thumb is that it takes 1/3rd of a watt of electricity for your new, very high efficiency air conditioner to cool (remove) the heat generated by a 1 watt device.

So, for example, let's say you're using a PC and a monitor that consume about 200 watts of electricity. Practically, all of those 200 watts are released as heat into the room. How many watts "harder" does your AC have to work to remove the heat released by the computer system?
66 watts = (200 watt PC w/ Monitor) ÷ 3
So that 200 watt computer/monitor combo releases enough heat so that your AC unit needs to consume an additional 66 watts of electricity to keep the room cool. This is starting to add up! Leaving your 200 watt computer on is actually costing you 266 watts in the summer months!

Impact on heating
There is some good news - the heat that your computer generates does help heat your home in the colder months, reducing the amount of heat that your heating system needs to generate. There is only one drawback - a computer is an inefficient heater compared to a typical home heating system - a heat pump or a fueled furnace is a much more cost effective way to produce heat. The savings related to "heating-by-computer" is highly variable, based on the type and efficiency of the heating system you have, plus the cost of the fuel you're using. Here are some estimated adjustments based on high efficiency heating systems of various types:

[The above adjustment calculations are based on the cost of generating heat in a residential heating system as follows:
Your heating system may have different efficiency properties, and fuel rates can fluctuate wildly. Although electricity isn't really 100% efficient considering generation and transmission losses, for the purposes of these cost comparisons, 100% efficiency is correct. Similarly, there is energy expended to move gas and oil from their source, but again, we attempting an apples-to-apples comparison of home heating costs by focusing on the almighty dollar, not source-to-consumer energy efficiency.]

Computer Details for the above chart

I measured the computers doing a variety of tasks ... from nothing to "heavy usage". I started with just booting the computer, launching a few applications, and watching the meter. I call this the "on" state.

The above chart shows the power consumption numbers I got out of my watt meter. I used the handy and relatively inexpensive "kill-a-watt" power meter for all measurements. This handy device measures Watts, Volt-Amps, KWh, Frequency, and a bunch of other power attributes. Note that not all the numbers are "fair" - the eMac, iMac G4 and iMac G5 have a built in display which was on and measured, and the PowerBook does battery trickle charging, but it's screen was fully dimmed during measurement. (for full screen brightness on the powerbook, add 5 watts). The Mini and WinPC's monitors were not measured.

Next, I hope to upgrade my Mac Mini to a Core 2 Duo CPU - stay tuned for more details!