My apartment isn't mine, but I pay for the heat... and heat has been getting expensive! So I decided I needed to do something to reduce my heating bills.

Many claim that the easiest way to save money on heat is to install a "set-back" thermostat. After confering with my landlord, I went on a mission to replace my apartment's thermostat. 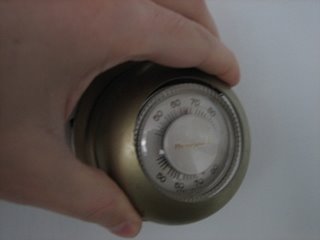 
The original thermostat was a basic round Honeywell unit found in about a zillion households. It worked, but it was completely manual. A timer-type thermostat is promised to save me lots of money on my heating bills. I went to the local hardware store and purchased a Ritetemp 8030c for about $50. It came with a rebate of $25, so in all it only cost me about $25. But installation of a thermostat is pretty pricey, so I decided to save some money and do it myself.  Later, I ended up installing a Lux Programmable thermostat, which was very easy to install and was also inexpensive.

The first order of business was to remove the old thermostat. I turned off the power to the furnace and popped off old thermostat's bezel with my fingers. Under the bezel were three small screws that I backed out with a small screwdriver. 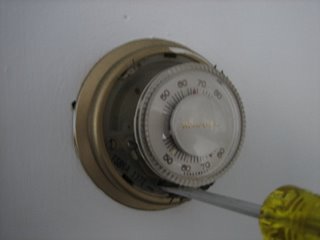 Removing the screws of the thermostat.


With the screws removed, the thermostat easily came off of it's backing plate. The thermostat control wires attach to the plate, and the plate is screwed to the wall. From there, I removed the plate from the wall, leaving the two wires still attached. 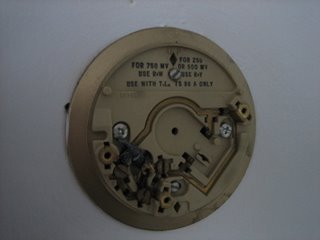 The backing plate has the two wires attached.


After detaching the plate from the wall, I tied a long string to the wire bundle to prevent the wires from slipping into the wall. This is pretty important - it stinks to have your wiring slipped into the wall, because it can be very tricky and complicated to get them back out. 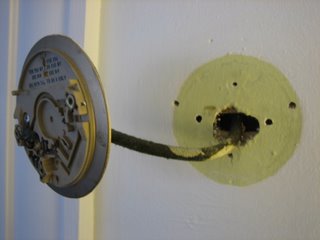 The backing plate, with wire, detached from the wall. 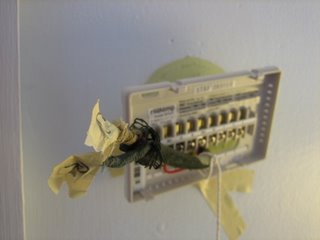 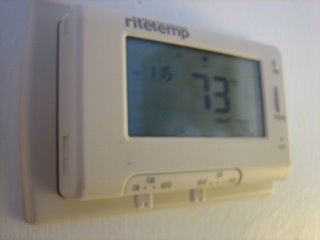 Some time, I'll let you know how much energy, if anything, I've saved by installing this new thermostat.
at November 12, 2006 3 comments: