For years I've had an RSYNC backup solution for my immediate family's computers. Each computer would perform a remote RSYNC over SSH to my home Linux box on a daily basis. It worked great, but it was a pain in the butt for a few reasons:Recently, I stumbled upon a Mac and Windows internet backup solution for the grand price of Free. It's called Mozzy Home, and its pretty darn good for the following reasons:
You can get a free Mozy Home account here (shameless referral code attached):

The biggest limitation with the (free) Mozy Home is the 2 GB limit. But for about $5 a month, you can back up an unlimited amount of storage - that's a lot!

Now I was thinking "Cool, now I can back up the terabytes of storage of my work server for $60 bucks a year". Um, no. The license doesn't seem to allow for that kind of use... and for good reason - crazy customers would likely swamp them with "unlimited" data. For professional use, you have to go for their "Pro" plan, which, sadly, fails to support pro-class platforms such as Unix, Linux, or even Mac OS.

So although Mozy isn't my option for the corporate servers I'm responsible for, it is a fine solution for Windows and Macintosh home computers. It greatly simplifies my Family Technical Support responsibilities, and I won't have to discuss the difficultly of data recovery when a drive crashes.

We now live in the age where part of your life is spending time and money maintaining and repairing things like your car keys.

My Porsche's remote key was getting weaker and weaker, until one day it stopped operating altogether. Keyless remote without the remoteness. Not so good.

I was a bit fearful spending a sizable chunk of my time and money at the dealership to have such a small problem addressed, and so I decided that I would try to replace the battery myself.

The following video guide shows you how to successfully open up the key and replace the alarm remote battery.

Items required:
Nothing feels better than a $5 Porsche repair.  Replace the battery in all your keys at once and then don't deal with it again for years!

Email ThisBlogThis!Share to TwitterShare to FacebookShare to Pinterest
Labels: automotive

Some Globe-style CFLs are sucky.

As you know from reading my blog, I'm a fan of not throwing away my hard-earned cash. So it was obvious for me to replace my incandescent bulbs with much more efficient CFL bulbs. My conversion saved me quite a bit of money, but there was one trouble-spot: the CFL globes I installed in the bathroom.

I have one of those old-fashioned bar fixtures in the bathroom, designed for a set of three exposed globe-style bulbs, and so only globe style bulbs would look right in the fixture. I use my bathroom quite a bit, and the fixture with incandescent bulbs would normally require 180 watts to power (3 bulbs @ 60 watts each). Replacing them with CFLs seemed like an easy target for reducing electricity costs. "No problem!" I thought, since globe CFLs are readily available in retail stores. 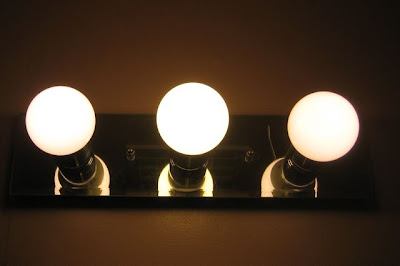 My 1980's Style Bathroom Light Bar with Globe CFLs.
GE CFL in the center, Sylvanias on each side.
I bought a set of three 14 Watt "Commercial Electric" globe CFLs from Home Depot (I think). Sadly, they had a long startup time - much like the CFL bulbs of yesteryear. I would go into the bathroom, flip on the switch, and wait in the dim light for a minute or more. It all came to a head when guests arrived - they complained that the bathroom lights weren't working. I told them to "hold it" for another minute while the bulbs warmed up. Embarrassing. Soon after, one of those globes failed - my one and only CFL failure.

I considered swapping out the fixture for a more modern one (that doesn't use all the tacky globe bulbs), but since I live in an apartment and don't want to make investments on my landlord's behalf, I decided to stick with the old-fashioned fixture.

I went back to the store (Lowe's?) and bought a set of three 9 watt Sylvania globe CFLs. I figured that a brand like Sylvania would operate more to my satisfaction, but I was wrong. The Sylvania globes were even slower in terms of startup. As a fix, I ended up swapping out the center CFL with a 25-watt incandescent globe in order to provide enough light at startup, and then after a minute or so the Sylvania globes would catch up and surpass the brightness of the 25 watter. Finally, my bathroom lighting was adequate, with two crusty CFL globes and one incandescent globe.

It all came to an end this week, when the incandecent blew out after a pitiful 3 months of use. So I went back to the store to buy a replacement. I found a GE CFL globe at Target, rated at 15 watts. I decided to give it a try, and plunked down $6 for the bulb (versus $2 for a short-life incandecent globe).

I placed the GE globe in the middle position of the fixture, again to give suitable light while the slow Sylvanias warm up. And to my glee, the GE gets bright very quickly. It takes less than a second for it to fire up, and almost immediately delivers full brightness. And that will make my bathroom experience all that much better, with a total consumption of about 33 watts - a reduction of almost 150 watts.

I could replace the two remaining Sylvania globes with GE globes, but now that I have plenty of light, I'll keep my bathroom lighting in its current configuration.

Other than globes, I've had great luck with CFLs. I haven't had a single issue with a "twist" or capsule CFLs, regardless of brand.

If you have other experiences or helpful hints, feel free to comment.
at December 27, 2007 2 comments: