CFL Update - Save Electricity, Save Money.

I've been receiving a lot of questions and comments on compact fluorescent light bulbs ("CFLs"). Why? Well, maybe because electricity rates are almost three times as much as they were only a few years ago!

I have replaced most of my traditional "incandescent" light bulbs with CFLs. Replacing old-fashioned bulbs with "fancy" CFL bulbs has reduced my electric bill by more than half - or hundreds of dollars per year - at very low cost. 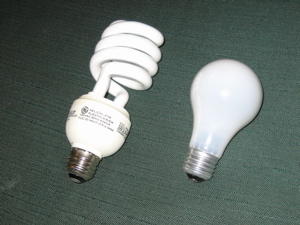 CFLs are more expensive than regular light bulbs, but they use much much less electricity and last much longer. I've paid between $0.99 and $3.50 per CFL bulb, depending on the type and style.

Some readers say that they have had premature CFL bulb failure when mounted in some enclosed ceiling light fixtures. I have never had a CFL fail, and I have several enclosed light fixtures. In any case, note that some bulbs may be labeled as "inappropriate for enclosed fixture use". I recommend that you heed the manufacturer's label. 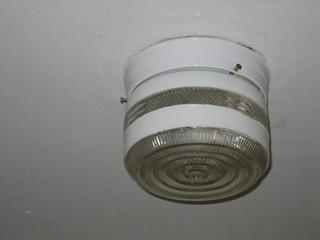 Readers report that some CFLs can fail prematurely in an enclosed light fixture like mine. After 3+ years, I haven't had a problem.
Dimmers and Timers

Many low-quality, over-priced wall timers don't work with CFLs due to their cheap design. The answer? Buy a Swylite LST100 wall timer - it looks great and is much more functional than the ones I've bought at the local home store. Oh, and they cost less too. 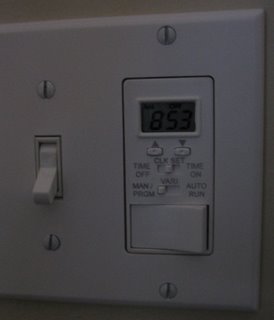 Other readers have complained about CFL "warm up time" when a CFL takes several seconds or even minutes to get to full brightness, especially in cold temperatures. This seems to be an issue with some old-style CFLs and some lousy brands. I did have a problem with some cheapo off-brand bulbs I bought at the Home Depot in 2004. These lousy CFLs were always very slow to get to full brightness, so I put them in the basement fixtures where I don't mind the slow start time. I recommend that you stick with modern name-brand bulbs. Ask your local lighting store to show you the startup characteristics of the bulbs you're buying.
at October 23, 2005 No comments:

Since everyone from the President on down is asking us to minimize our energy consumption, I took a look at my own electricity use. I didn't feel I was being wasteful, but I thought it would be interesting to just take a look and see. What I found surprised me - and helped me to save $300 per year at negligible cost.

My first step was to replace often-used lightbulbs with high-efficiency CFL-type bulbs. During the evening I often have my kitchen and living room lights on... in total, I use these lights maybe 2000 hours per year. I went down to the local home center and bought about a dozen discounted CFL bulbs of various wattages (from 13w to 27w). I replaced the bulbs in the kitchen, bathroom, living room, bedrooms, and office. In all, I figure I save about $150 per year in electricity alone, thanks to the CFL bulbs!

By the way, my new CFL bulbs aren't nearly as sucky as the old-fashioned ones I used five years ago. These new ones are at full brightness almost immediately after I switch them on, and and they seem to last forever (at least so far!). I did buy one lousy batch of CFLs - the lousy ones brighten slowly - but these few slow-start variants are the exception (and weren't much of a risk at only $0.99 each).

After addressing the lighting, I moved on to exploring how much electricity my appliances use. In order to easily and accurately measure my electricity consumption, I bought a simple watt meter called a kill-a-watt (about $30). I temporarily plugged appliances into this little meter in order to measure their consumption.

I found that my fridge consumes an average of 65 watts of electricity. My desktop computer system sucked down over 120 watts - with the monitor off! I also looked at a collection of appliances like clocks, the TV, the VCR, and so on.

My goal here was to simply minimize. There were some easy targets. Rarely used stuff was simply unplugged. But there were some really big money savers.

My fridge's "anti-sweat" option was turned on. This option is designed to keep the fridge from dripping water when it's extremely hot and humid. But do you know what? It's only like that a few days a year where I live. So for me this anti-sweat option does nothing but consume 16 watts for 8600 hours in a year. Keeping it on costs me $19+ per year and provides zero benefit. So turning the anti-sweat option off was a no-brainer.

Also, my fridge was running too cold. A thermometer showed that it was running at 32F (fridge) & 0F (freezer). I've seen suggestions that making your fridge too cool is of no benefit and can cost up to 20% of operational costs. So I adjusted my fridge to run at a recommended 40F, and 5F for the freezer, saving me perhaps another $25 per year.

I was bored a one day and decided to put up some ads on Craig's List - you know, I wanted to sell some of my junk.

So I put up an ad a got a reply from a guy named Bobby. Bobby is overseas, and he is looking to buy a junky $100 bike from the good old U.S.A. He also owns a shipping company.

It also happened that Bobby needed a $2,500 check cashed, and evidently he couldn't do it in his own country. Therefore, he asked me to accept a check for $2,500. Then I would then send him $2,400 and the bike. It'd be a win-win for everyone! His shipping company would pick up the bike later, so there'd be no shipping expense to me.

It's great that the internet can bring the world together, and allow people to rip-off others across the globe.

So I received the check via FedEx. The envelope was sent from Nigeria. But what do you know, the check turned out to be a fake - drawn on some poor soul's account. Good thing I didn't cash it and send Bobby the money - if I did, I'd be out $2,400.

Since then I've noticed a shocking number of people trying to scam me on my on-line ads. I recently tried to sell a crappy computer for $15 on Craig's. I got a weird reply from a potential buyer, and so I responded stating that my crappy computer was worth my $1500 asking price. Of course, the buyer was STILL interested, despite a two order of magnitude price increase. It's rare that I go to buy a $15 item, and remain agreeable when it turns out to be a $1500 item. The buyer, of course, was "located in the UK" and had a "special shipping arrangement with FedEx". Bah! On-line Ads: it's not only buyer beware - it's also seller beware. Or, just beware.
at October 04, 2005 No comments: