Today I got around to measuring the electricity consumption of the cable TV box that is in my home - a Comcast Motorola DCT-3412. It's an HDTV Cable TV box with DVR. 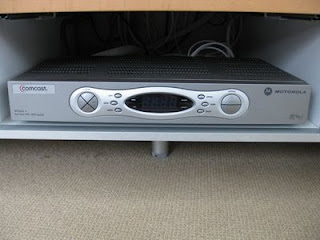 Is this "powered off" cable box costing American taxpayers hundreds of millions?

and measuring the wattage.

Surprisingly, I found that my cable box consumes just about as much power when "off" than when "on"!

Here's what I measured with my Kill-O-Watt meter:
Why provide a power button when it makes so little difference in power consumption? Who knows!

So I did some math to figure out how much 30 watts of consistent power use costs, using recent prices for electricity around here:

Amazing - think about it - according to my analysis, perhaps 5 million people pay $44 per year for the electricity for a cable TV box that's mostly powered off! That's approaching a quarter of a BILLION dollars in electricity every year, thrown away!