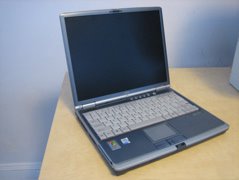 The power connector of my S-Series Fujitsu laptop failed (a Lifebook S6110), just like so many others out there. I called up Fujitsu for repair; their local service center wanted about $80 just to look at the laptop (which obviously only needed a new connector). I concluded that it was silly for me to throw $80 at an estimate for repairing the power connector, so instead I went after repairing it myself.

At first I looked on the web for the right connector. After searching high and low, I found that the Asia Industrial Company appears to sell a very similar part, the DS-208. Let me know if you contact them for this jack.

I also saw a part for sale by a laptop power jack "repair" web site, but it didn't look like it would be mountable on my laptop's motherboard - the pins are in a different location, and I think it'd be very difficult to properly mount this part inside of my laptop. 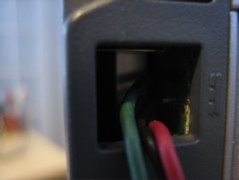 Pigtails off of the board

I decided to start by adding a few pigtails to the motherboard. I opened the laptop, with the helpful instructions found here. Then I soldered in a short length of wire.
From there, I added a simple connector on the end of the pigtail. 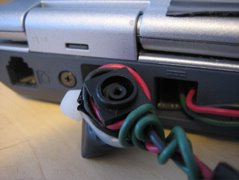 At least my laptop is now, um, laptop-able once again. It does look a bit silly with the pigtail, but is is fully functional. I hope to acquire the correct DC Jack for the laptop. Please contact me if you have any leads or advice.

My next step will to try to get that DS-208 part and give it a shot.

To be honest, my Fujitsu is getting a little old, so I might end up buying another new laptop. There are a lot good laptops out there... and that's why I didn't initially go for the "Fujitsu service center" repair.